Manav Rachna International University (MRIU) has always been a research-driven Institution encouraging students to think out-of-the-box and bring their pioneering ideas to the forefront. Five Teams from MRIU performed exceedingly well when their projects in four categories were selected for the Final convention at the National Level during the North Zone Convention of Anveshan 2017. The Five teams were selected to participate with their Projects in areas such as Agriculture; Basic Sciences; Engineering & Technology; Health Sciences and Allied Subjects; Pharmacy, Nutrition and Social Sciences; Humanities, Commerce and Law.
The Teams with their projects excelled in four categories, earning themselves a berth in the Final convention at the National Level. Their Awards were in the category of Health Sciences—wherein Team from MRIIC & CSE, FET won the 1st prize for the project Posture Correction belt; in the field of Social Sciences– Team from Media, FMeH won the 1st Prize for their project Ek Kadam Roshni Ki Aur—a short film on Organ Donation; in the category of Basic Science — Team from MRIIC & Biotech, FET won the 2nd Prize for the project Smart Solution for Air Pollution Mitigation; and in the sphere of Agriculture—Team from Biotech, FET won the 2nd Prize for their project Integrated Management of Alternaria Blight in Tomato. 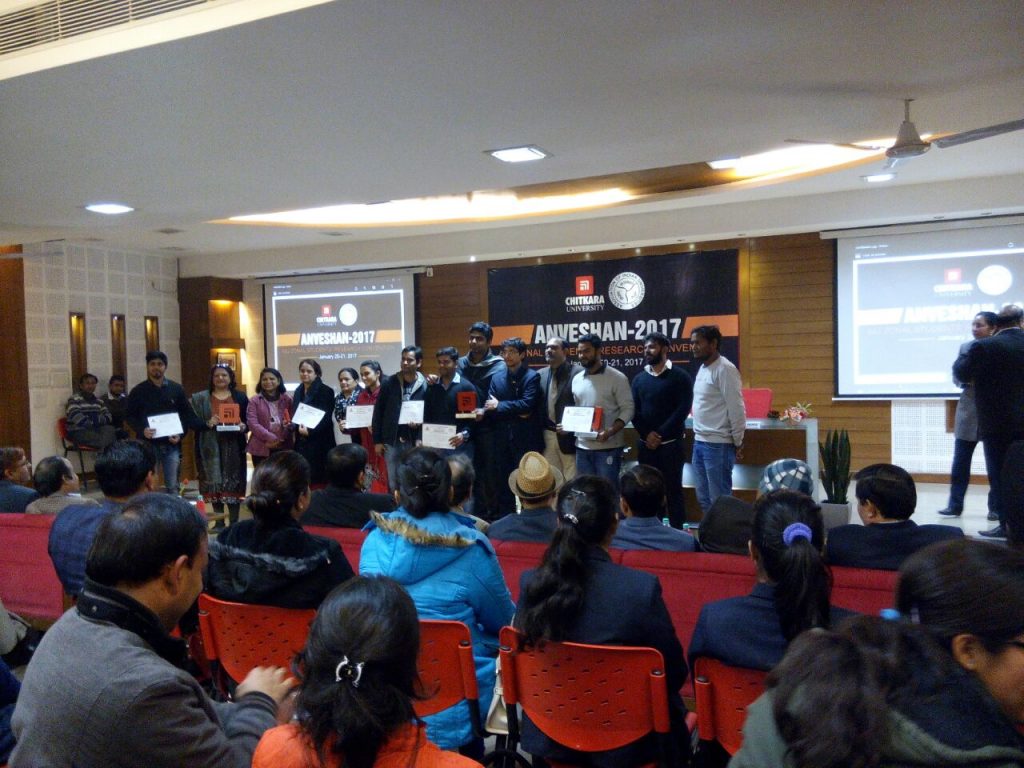 It is noteworthy that Anveshan 2017 provides a platform to the young brains to become trend setters and role models of a vibrant India. With a view to inculcating a research culture in higher education institutions, the Research Division of Association of Indian Universities, has taken a pioneering initiative to organize Student Research Conventions for the aspiring researchers throughout the country. These Conventions aim at identifying the young and rising talents, who would be promoted through proper encouragement and incentives. Also an attempt shall be made to commercialize their research projects with industrial collaboration. The conventions are being organised in Five Zones ie : East, West, North, South and, Central. MRIU Teams have excelled from the North Zone at the Convention held at Chitkara University Punjab.
Ecstatic with the win, Dr Prashant Bhalla, President, MREI said, “The Teams from MRIU have done us all proud with their amazing performances at the North Zone Convention of Anveshan 2017. MRIU’s consistent efforts and ceaseless mission to promote and accelerate scientific research and innovation and their application towards community development seems to have borne fruit. It gives me immense pleasure that our enterprising students are a part of a breed of young and rising talents in the country who are bound to bring about massive transformation in the country!”