To keep the students involved and excited, Manav Rachna University conducted various activities under Manav Rachna Life Skills Programme. Representing their respective clan, students participated in various activities in five verticals- Literary, Cultural, Sports, Media and ISR. Just for Gags’- a musically/dubsmash event was organized for the students. This was a fun event where students were given different themes on the spot to make an interesting video in allotted time. Mr. Ram Chatterjee, Dr. Seema Sharma and Ms Riddhi Sethi were the judges for the same. Shailja Yadav bagged the first position while Sarika Gaind secured the second position. 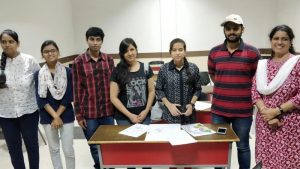 Doodle Competition was the highlight of the day in which students drew beautiful coloured patterns on the paper. This was followed by a creative writing workshop using egg shell. Students of Manav Rachna University also had a session on creative writing under Media vertical of Manav Rachna Life Skill Programme which was conducted by Ms. Shailja Naqvi (Dy. Director, Radio Manav Rachna 107.8) at Media Center, where the discussion happened over the aspects of Narrative writing and News formation.

The session was quite interactive and engaging as the students involved in Q&A format asking the queries and giving the input on the same, the discussion started with 9 point fundamental structure of news writing: Timeliness, Popularity, Proximity, Conflict, Significance, Unusualness, Emotional connection, Gender, and Progress Report.

The day ended with highly energetic sports activities which included Cricket, Basketball, Volleyball, Table Tennis, Badminton, Squash, and Football. A Badminton Practice Round was also planned wherein students played in doubles under the guidance of Mr. Om Bir Singh. They were trained on handling the equipment, formation of teams, service styles and postures.