The hunt to crown the ‘Maruti Suzuki Autocar Young Driver 2015’ ended on March 19. Mohit Kumar Malik from Manav Rachna International University – Owner of Microll Auto Industries, scored the highest on the experts’ score cards and won the prestigious Young Driver Award. Malik drove home a brand-new Maruti Alto 800, his prize for being the safest young driver in the country, beating 41,000 participants.
Now in its seventh edition, the Maruti Suzuki Autocar Young Driver contest conducts tests to determine the participant’s awareness about road safety, driving skills and traffic rules over various stages of practical and theoretical tests before selecting the winner. 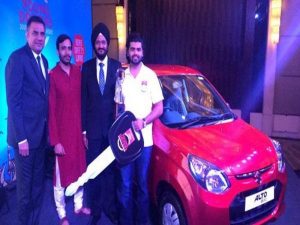 The contest, held for those between 18 and 30 years with a valid Indian driving license, was held over three stages. The first stage saw online-registered participants take an online theory quiz to qualify for the next round. In the second stage, participants underwent a driving test at Maruti Driving Schools located in 42 cities across the country. In the third and final stage, the finalists selected went to Delhi for the grand finale where they were judged on 20 parameters pertaining to safety, vehicle control, theory knowledge and its application while driving.
The final gruelling day of testing witnessed 30 finalists undergo a challenging course at the IDTR (Institute of Driving and Traffic Research) in Delhi. A panel of experts reviewed their driving and safety consciousness, and zeroed in on one who outshined the rest.
Winner Mohit Kumar Malik was handed over the keys of his new car by Sorabjee, actor Boman Irani, Randhir Singh Kalsi, executive director, Maruti Suzuki India, and Jayant Chaudhary, general secretary of Rashtriya Lok Dal.
Posted By Department of Computer Science (Manav Rachna International Institute of Research and Studies)