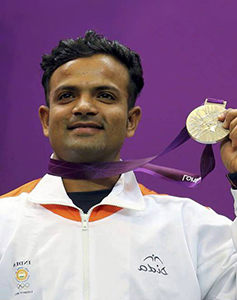 We express our heartfelt wishes and compliments to him on achieving the distinction of being a notable contributor in Shooting. It is with his extraordinary commitment, service to the nation, and liberal approach that he made every Indian proud when he won the Silver Medal in the individual 25 meter rapid fire pistol event at the 2012 London Olympics, making it the second medal for India in the event. His panoramic vision, professionalism and pursuit for excellence have made him an integral part of the Indian Army Marksmanship Unit (AMU) Mhow since 2003. The most striking feature in his game is his attitude and the never-say-die spirit which has made him win awards and accolades across the globe including three gold medals & one silver medal at the 2010 Commonwealth Games. With such stellar rewards & recognition, Major Kumar was bestowed with the third highest civilian award ‘Padma Shri’ in the year 2013.

A passionate and avid sportsperson, he has been bestowed with the prestigious Arjuna Award by the Government of India in 2006. Major Sharma proved his mettle by bagging two gold medals, the individual 25 meter rapid fire pistol competition and the pairs competition in the same event, at the 2006 Commonwealth Games and also has a bronze medal in 2006 Asian Games to his credit. Major Sharma’s seminal experiments in the field of sports have illuminated the path for other aspiring sportspersons and the discipline, competitiveness and focus possessed by him has garnered him a lot of international attention. Being supported by the Olympic Gold Quest, a program of the Foundation for Promotion of Sports and Games, committed to bridging the gap between the best athletes in India and the best athletes in the world, and to help increase the Olympic Gold medals for India, Major Sharma ardently works towards promoting budding athletes.

Major Sharma has served our country with matchless grace, wisdom, and clarity and has been conferred with innumerable honor and compliments from all across the world. He was also chosen to be the Indian flagbearer at the 2014 Commonwealth Games. Major Sharma also won a silver medal at the 2009 ISSF World Cup Beijing in rapid fire pistol.