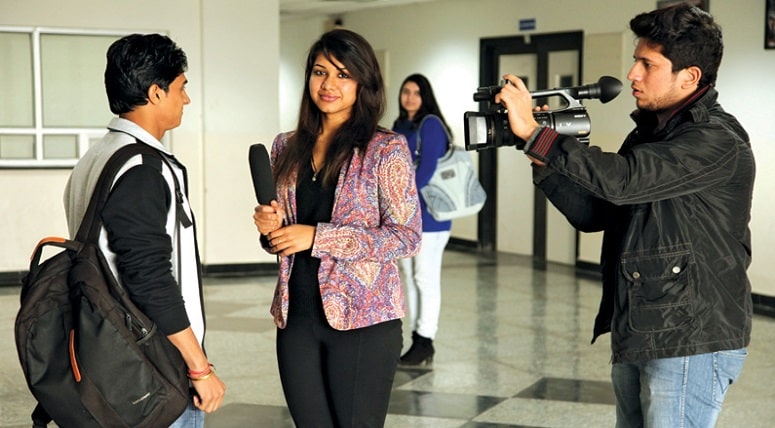 Career As a News Reporter Duties, Responsibilities and Skills Required

Here’s what it takes to be a Super Reporter: Ears, Eyes & a Nose for News!

With a mike in hand and a camera in tow, you may have watched many news reporters on TV fearlessly travelling through places, talking to people, risking their own life– all to get us the information and to help us understand the implications of the facts. While you and I tuck ourselves in the safe confines of our homes post the lockdown imposed by the Government, these reporters, irrespective of whichever medium they may be associated with–print, radio or television–are out there in the field gathering news, to package and transmit/broadcast it for the general public.

Reporters are our window to the world. But while it may seem it is an exciting job, it does come with a lot of risks, as well as ‘responsibility’.

What are the Duties and Responsibilities of news reporter

As the world looks upon the news media for information, there comes the accompanying obligation for reporters to be balanced, unbiased and correct in reporting the news.
A good reporter must take the responsibility for what he is writing. He must not spread misinformation especially in sensitive situations like an epidemic, a war, natural disasters etc. He must research well, verify his sources/facts multiple times to ensure accuracy and objectivity. He should also be utmost careful with the language he uses and avoid using emotional or sensationalist phrases like the killer virus or catastrophe, etc. that can create panic among the masses.

Ideally, the primary duty of the media is towards the public–who they must inform and educate. The reporters, therefore, also sometimes don the role of a spokesperson of the people and raise issues on their behalf. They use their platform to question the Government/authorities and hold them accountable for their decisions/actions. That is why it is important for reporters to keep their credibility intact.

The Perks and the Downsides

Since they are in the business of providing information, the reporters can exercise a formidable amount of influence over us. They can mould public opinion and motivate us in favour of a particular line of thinking/policy. More than half a billion people in India consume media in one form or another, each day. The prospect for your reports to reach a large number of people is exciting indeed. In many cases, the reporters get to hobnob with the powers that be and tend to wield some powers of their own too in the society. They are also influencers on social media platforms such as Twitter

Through investigative methods, the reporters expose corruption scandals, scams, or any wrongdoing–be it in local bodies or in high offices or in businesses or sports. Remember the Watergate Scandal, when two reporters working for The Washington Post, dug out and published information that led to the resignation of President Richard Nixon? Or the Bofors case closer home, when investigative reporters almost brought the Rajiv Gandhi government on its knees.

Now for the downsides;

Well, if you are looking for a stable, regular 9-to-5 kind of job, then this one is not for you. A day at work in the life of a reporter is never the same. This field is very demanding not just with regard to hours, but also on commitment. If you are called out for a breaking story, you have to be prepared to drop everything, pick up your “weapon” (pen, mike or camera) and be right there on the spot, whatever time of the day, or night, it is. And there will be multiple occasions when you will be running against near impossible deadlines. But despite the challenges of uncertainty in working hours, deadline-inspired pressure cooker situations and sometimes working under unfavourable conditions, the reporter’s job is still an attractive one for youngsters who get endeared by the excitement and challenges that come with it.

Skill-set required to be a good reporter

Apart from excellent communication skills and ability to write well, there are some important qualities that a person, toying with the idea of taking up journalism, or specifically reporting, as a career must possess. He/she must have a good news sense or ‘nose for news’. The reporter must be able to dig out what news peg to take that will interest his readers. He must be well-equipped with general knowledge and be alert to the happenings around him. A dose of healthy skepticism, curiosity, attention to detail can work best for him in the discharge of his duties. He must also have good networking skills and the ability to work with sources. A good part of the work might involve use of documents and public records. Therefore, the reporter must be willing to research in order to ensure authenticity of his reports.