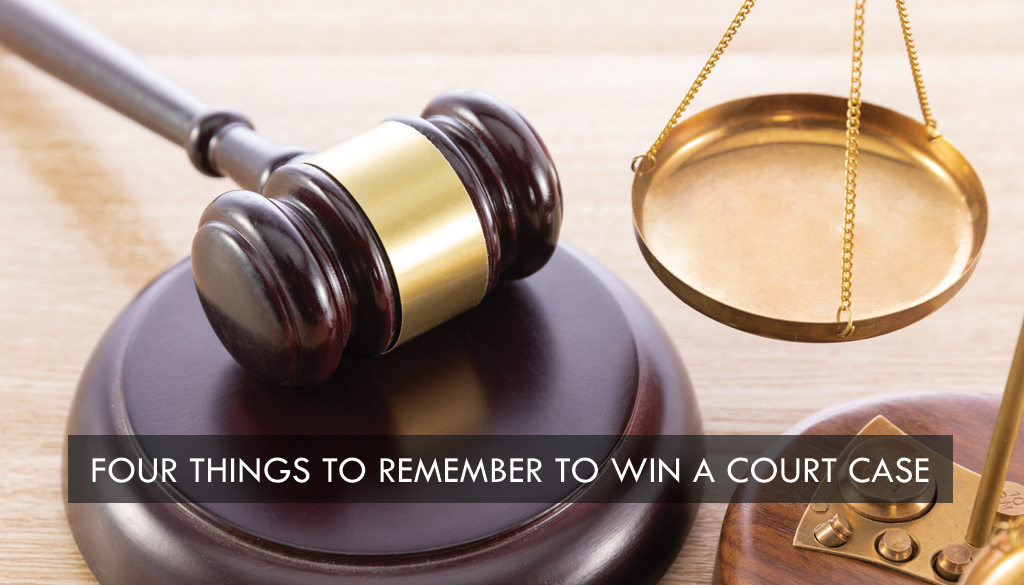 FOUR THINGS TO REMEMBER TO WIN A COURT CASE

As a lawyer you have dual responsibility. One, you have to protect your client’s interest. The litigant is not interested in abstract questions of law or justice. What he/she wants is success in his/her case. You have to do all that you reasonably can in order to win a court case. Furthermore,  you have to help the court arrive at a correct decision. The Bench and the Bar are the two wheels of the chariot of Justice. The advocate and the judge ought to have equal alacrity to ensure justice. Some pointers that one can keep in mind to efficiently win a court case are

Tell the Court Everything That It Wants to Know

A judge is in a good position to decide a case correctly, when lawyers for the two sides present the case from opposite view -points. A court wants to know everything that can possibly be said in support of a certain view. So an advocate is only doing his/her duty, when he/she places before the court the facts and law which support that view. Barring certain exceptions such as Public Prosecutor in criminal cases, it is not necessary for an advocate to draw the court’s attention to matters, which support the contrary view.

Know the Facts and Questions of Law

Being a lawyer, one cannot argue one’s case properly, unless they have studied the facts thoroughly. If there is a dispute about pedigree, you must know the extent to which they tally and on which they differ. An advocate arguing an appeal should be able to point out important contradictions in the statement of witness of the opposite party without requiring the appellate Court to go through all the depositions. Not only should the advocate be ready with the decisions that support him, but he should also study  the authorities  that his adversary is likely to cite. Many statutes have been amended from time to time. The lawyer must be acquainted with the latest amendments. It is risky to refer to old editions of books or statutes.

Having studied the facts and law applicable to the case, you are now ready to appear before the court. You have to present your client’s case in the best light, and thereby possibly win the court case. You are well within your rights in stressing the points which are in your client’s favour. But as an advocate you must not mislead the court on questions of fact.

The same remarks apply to arguments on questions of law, although it may be conceded that there is more room for honest difference of opinion on question of law. Where two views are possible, an advocate is entitled to urge the view that favours his/her client, to win the case. But if a statute is clear, or if the Supreme Court has decided a question of law, it is useless to argue the point further.

The object of arguments is to convince the court. Argument is useless, if there is no reasonable chance of the court accepting a certain view. It is permissible to raise technical points, provided that there is a chance of the case succeeding on a technical point. But there should be no hair splitting for its own sake. It is annoying to find that a lawyer is merely playing to the gallery, knowing fully that the point has no substance. Lengthy arguments and tiresome cross examination are wasteful. Judgments of courts should be concise. And arguments of advocates should be to the point.

Keeping a note of these points and thereby, efficiently using it in their practice, would help the advocate to win the court case.