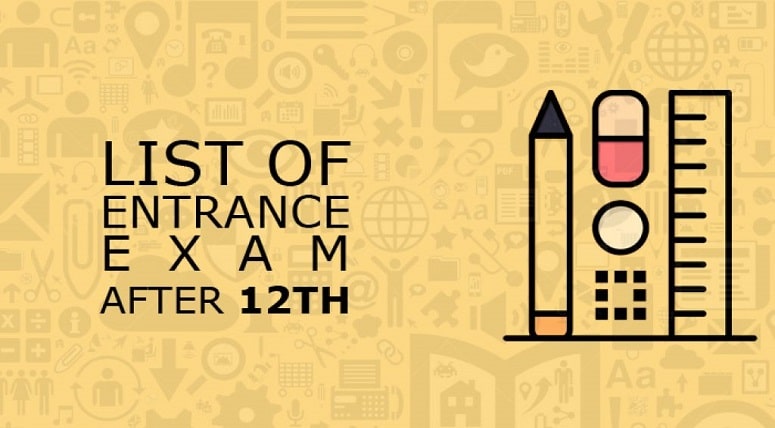 ‘What Entrance Exam after 12th?’ is the common dilemma every student faces at a moment in life. Considering the present context, we can surely say, gone are the days when doctor, engineer, accountant and teacher were among the top professions. Today, several conventional and unconventional career options after 12th are available for the students. Students can appear for entrance exams after 12th for admission to their dream UG Program in top-ranked universities offering courses of the upcoming era. There are far more options available in government jobs as well for which they can appear in competitive exams after 12th.

Students nowadays have an opportunity to explore their passion by pursuing a course after 12th in the field of their interest. Social Work, Liberal Arts, Sociology, Design, Architecture are some unconventional career options available to students which they can pursue after 12th. Cracking an entrance exam after 12th would help you choose the degree of your choice at UG level.

Students studying in any of the streams- Science, Commerce and Arts have a number of choices available in Competitive  after 12th. They can get admission to their preferred course and avail the scholarship for higher study by cracking an entrance exam after 12th. These fresh school graduates have the potential to serve the different sectors of the economy of the country. There are some specific entrance exams after 12th commerce, science (PCM/Biology) and arts. Engineering, Management, Law, Medical, Architecture and several other trending career options are available for students after 12th.

B.Com, BBA, BA (Hons.) B.Sc. are some common courses available in specializations that students can apply for. There are university-specific entrance exams after 12th available for admission to these courses.

Some Other Entrance Exams Available for Commerce Students after 12th

Students who have completed 12th in Arts stream have a wide range of course options available to choose from. Here’s the list of courses for which students can appear for the entrance exam after 12th Arts:

As the exams of Class 12th get over, students get into the dilemma of choosing the right career option being unaware of the number of entrance exam available out there. Along with some of the conventional courses available for students who completed their 12th in Science, Commerce or Arts, there are some unconventional yet popular entrance exams that are the talk of the town and students can apply for them after 12th.

After completing 12th PCB, students look for options in which they can start building the foundation for a successful career. Appearing for an entrance exam after 12th Biology is indeed the first step. List of exams for PCB students is as follows:

Students can appear for multiple government competitive exams after 12th for a bright career. They can start preparing for the competitive exam after 12th class as soon as their exams get over. For years now, government jobs have been considered to offer a lucrative career after 12th. Many government job applications come up every now and then and students can apply as per their qualification and interest. Salary, Allowance, Eligibility benefits, and of course, security are some of the perks a government job offers for which lakhs of students appear for government exams after 12th. Candidates who aspire to grab a great job in the government sector can apply to vacancies available in different genres be it accountancy, officer, clerk, translator, and many more.