A tribute to Steve Jobs

Steve Job’s quest for spiritual enlightenment brought him to in the summer of 1974. Jobs came to India with one of his best friends from Reed College, Dan Kottke. Jobs started Apple with a fellow college dropout Steve Wozniak in his family garage in Los Altos, California in April 1976.  Jobs, then 21, was the ‘sales’ guy, while Wozniak worked as an engineer. Wozniak said about Jobs during an Intel Corp conference in August 2008, “Every time I designed something great from when we were very young, he would say, “let’s sell it.” “It was always his idea to sell it.”
Their first creation was the Apple I – essentially, the guts of a computer without a case, keyboard or monitor. The Apple II, which hit the market in 1977, was their first machine for the masses. It became so popular that Jobs was worth $100 million by age 25. Time magazine put him on its cover for the first time in 1982.
During a 1979 visit to the , Jobs again spotted mass
potential in a niche invention: a computer that allowed people to access files and control programs with the click of a mouse, not typed commands. He returned to Apple and ordered the team to copy what he had seen. This showed his nature of taking other people’s concepts, improve on them and make them completely different and amazing new products! “We have always been shameless about stealing great ideas,” Jobs said in an interview for the 1996 PBS series “Triumph of the Nerds.”
Steve Jobs, a visionary, a re-inventor and the icon who shared his ‘apple’ with the world! He gave the world iPod, iPad, iPhone, Mac and changed the way people live or use technology.
This visionary died of liver cancer on 5 October 2011 at the age of 56 years creating a void in all of our hearts! But before he died he made Apple the biggest technology corporation in the world and then resigned as the CEO and gave the reigns to Tim Cook who very well deserved it. 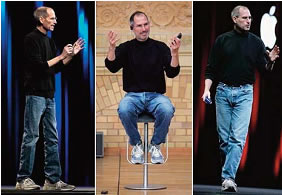 During his career, Steve Jobs has been named as primary inventor and co-inventor of more than 230 awarded patents or patent applications on a range of technologies including computer and portable devices to user interfaces, speakers, keyboards, power adapters and staircases.
Born on February 24, 1955, in San Francisco Steven Paul Jobs was adopted by Clara and Paul Jobs, a middle-class American couple. He saw his first computer terminal at NASA’s when he was around 11 and landed a summer job at Hewlett-Packard before he had finished high school.
Not many people know that Steve Jobs is a college dropout. In 1972, Jobs graduated from in , and enrolled in in . One semester later he dropped out. “All of my working-class parents’ savings were being spent on my college tuition. After six months, I couldn’t see the value in it,” he said at a commencement address in 2005. “I had no idea what I wanted to do with my life and no idea how college was going to help me figure it out.” Meanwhile, Microsoft copied the Mac approach and introduced Windows, outmaneuvering Apple by licensing its software to slews of computer makers while Apple insisted on making its own machines. Software developers wrote programs first for Windows because it had millions more computers. A Mac version didn’t come for months, if at all.
In 1985, Jobs was ousted from Apple by John Sculley after a disagreement on how to run the company. Incidentally, Jobs had brought Sculley from Pepsi. “What had been the focus of my entire adult life was gone, and it was devastating,” Jobs said in his Stanford speech. “I didn’t see it then, but it turned out that getting fired from Apple was the best thing that could have ever happened to me. The heaviness of being successful was replaced by the lightness of being a beginner again, less sure about everything. It freed me to enter one of the most creative periods of my life.”
On March 18, 1991, Jobs got married to Laurence Powell in a ceremony at the Ahwahnee Hotel in with a Zen Buddhist monk presiding. They have three children, Reed Paul, Erin Sienna and Eve.
He started two other companies: Next, a computer maker, and Pixar, a computer-animation studio that he bought from George Lucas for $10 million. In 1996 Apple bought Next so Steve again started working for Apple. Soon in 1997 he became the interim CEO of Apple. The company was in big loss financially so he stepped in. He slashed unprofitable projects, narrowed the company’s focus and presided over a new marketing push to set the Mac apart from Windows, starting with a campaign encouraging computer users to “Think different.” In his first phase with Apple before getting fired ‘he took charge of every detail and was a control freak’. But in the second phase after getting back to Apple ‘he was clearly much more soft and mature’! This change in him made it possible to make Apple the largest technology company it is today!
In 2003 Apple launched iTunes, which gave people a convenient way to buy music online. Furthermore new versions of iPod kept on launching, getting better with each version keeping the fans interested. By 2007 Apple had become a brand cult. This was visible on the day iPhone was to be launched as faithful followers slept on sidewalks outside posh Apple stores for the chance to buy one. This way of waiting outside shops day(s) before the launch became a tradition and was seen at almost every launch of a new version of iPhone and soon the iPad. This is how strong the cult was and it never faded!
According to a regulatory filing, Jobs took a salary of $1 in 2010. However, he owns some 5.5 million shares in the company, which are worth some $1.8 billion at the current price of around $333 a share, a rise of more than 50 per cent on the year.
Few know that Steve Jobs is a Buddhist and a vegetarian. Jobs has also never named a successor. He told shareholders in March 2008 that the board would have a variety of executives to choose from when he steps down due to any reason. He singled out two potential leaders: COO Timothy Cook and CFO Peter Oppenheimer. In 2004 he had been diagnosed with – and “cured” of – a rare form of operable pancreatic cancer called an islet cell neuroendocrine tumor. The company had sat on the news of his diagnosis for nine months while Jobs tried trumping the disease with a special diet, Fortune magazine reported in 2008. “This was the closest I got to death”, is how Steve Jobs described it in his Stanford speech in 2005. Then Jobs took a half-year medical leave of absence starting in January 2009, during which he had a liver transplant. In January 2011, Jobs announced another medical leave, his third, with no set duration. Still battling his cancer he stepped down from CEO to Chairman and appointed Tim Cook as the new CEO. Soon about a month later on 5 October 2011 he breathed his last!
–       Shrisha S. Bhat, B.Tech CS-B, FET MRIU