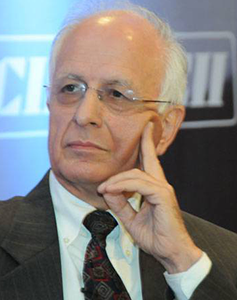 A man ascribed with the enhancement and growth of the country in social and economic belts, Shri Maira has served the nation for over five decades with his primordial wisdom, experience and ardent zeal. He is one rare and eminent individual who has held leadership positions in both, the private as well as the public sector, bringing a unique perspective on how the two can work together to foster growth for India.

Recognizing his exemplary understanding of both macro as well as micro policy issues, he had been involved in several government committees and organizations, including the National Innovation Council. He has led three rounds of participative and comprehensive scenario building for the future of India: in 1999 (with the Confederation of Indian Industry), 2005 (with the World Economic Forum) and 2011 (with the Planning Commission).

In his career spanning five decades, he led several organizations, including the Boston Consulting Group in India, Aditya Group, Tata Administrative Services and numerous other units of the Tata Group where he spent the initial 25 years of his careers shouldering eloquent roles & responsibilities. He has been on the board of several companies as well as educational institutions and has chaired several national committees of the Confederation of Indian Industry.

Possessing a combination of hands-on leadership experience and consulting experience to leadership teams across the globe, he is a thought-leader who has authored several books on leadership and organization transformation and is an eminent and sought after speaker on these subjects. He has established himself as a person whose outlook and demeanor endears his peers and subordinates alike and continues to be a perpetual source of inspiration for people around him. His keen social awareness with ability to develop key relationships is widely acknowledged.

A forward looking and perceptive administrator, Shri Arun Maira has navigated the country in times of unprecedented challenges in the economy and any discussion on policy and the future of India is enriched with his views. Being a trailblazer of change, his involvement in the growth and development of the country is unparalleled and his leadership qualities are inspirational.